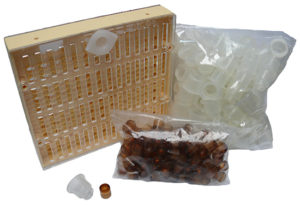 I have been keeping bees now since April 2013 and have thought quite a bit about trying to raise queens. I have done several splits over that time and have been able use those splits to help increase my hive count. I have purchased queens from different sources and also used queen cells from my hives to make my splits. I have even done “walk away” splits with some success. I tried grafting a time or two and failed miserably. I did a little research and decided to give the Nicot Queen Rearing System a try. It is the system my mentor prefers and he is walking me through the process so maybe I will avoid any major mistakes.

Why did I decide to try the Nicot System? I decided to try this system because it looks like it is pretty simple. I like the idea of the queen laying her eggs in the actual cup where the new queen will raised. The parts of the system are simple to use and it looks like it can be easily duplicated.

The basic concept involves placing a laying queen in a cage, or “comb box”, which is attached to a frame and introduced to the hive. The inside of the cage imitates a comb surface and the queen lays eggs in each of the 110 cells. Worker bees are able to gain access to the queen through the cover but because of her large size she is unable to leave the box. The bottom of each “cell” is actually a cup that can be removed and positioned upside down on a cell bar and then placed in a starter hive. From that point the system works like most any other system and the bees do the work of hopefully creating beautiful and productive queens.

I ordered and received my Nicot System from Brushy Mountain  a few weeks ago and recently placed the queen in the cage. She filled the cups with eggs and now I am waiting for the eggs to hatch so I can attach them to the cell bar and place them in the starter hive. I have taken some videos and will post them as soon as possible with accompanying blog posts to help explain the process.

Here are a couple of pictures of what has happened so far.

Since this is my first time attempting to raise queens with this system I am sure there will be a learning curve, but I am excited about it and hope to see success.

These are the items I ordered, all from Brushy Mountain: